Min Suk and Soo Young have finally kissed and made up, though Soo Young still has reservations about dating Min Suk while he’s in high school. The President finds Min Suk’s Dad and tries to atone for past sins. Meanwhile, Jin Woo gets closer and closer to finding out the truth about Min Suk’s identity and intentions. 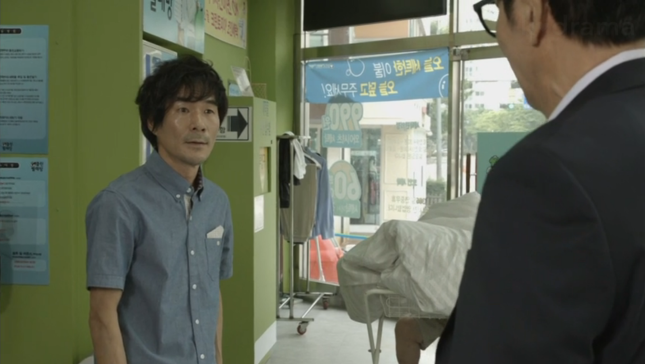 We start off with something a little different with this episode. Papa Choi is at his dry cleaning store, reading some information on rehabilitation medicine, when the President actually walks in. While he tries to talk casually, Papa Choi continues to angrily ask what right he has to even mention Lee Jung Soo (father of Min Suk, who was apparently the former President) and demands he leave. I wonder what the President could have done that was so terrible.

Min Suk arrives at work with presents for everybody to make up for his many absences. Now that Min Suk and Soo Young are on good terms again, Min Suk proceeds to make kissy faces at her through the blinds in his office. How the rest of the employees miss these obvious exchanges is beyond me. Soo Young quickly tells him that until he graduates she doesn’t want a romantic relationship, saying that they have to draw the line somewhere.

Team Leader barges in and finds out that Soo Young knows about Min Suk being a fake, which he’s glad to hear. He also expresses his sadness at hearing of Min Suk’s injuries and insures him that he’ll help him get a job after he graduates. Aww, Team Leader really does care about Min Suk. Managing Director comes in then, and this new foursome huddles together to swear loyalty.

The Jung household has finally lost its uncomfortable air now that Yoo Ah has accepted her fate. She even realizes how crazy it was to follow Min Suk around when he never gave any indication of liking her back. All in all, she takes it quite well and the sister bond seems to be mending. In a great gender switch, Soo Young actually begs Yoo Ah to punch her because she feels so bad.

Soo Young begins showcasing her awesome secretary skills as she helps Min Suk make it to both the Breakfast Meeting and his school exam on time. At school, Yoo Ah comes up to the trio and checks on Min Suk to make sure his shoulder is feeling okay before telling Tae Suk that she’ll agree to go out with him since he’s so crazy about her.

In the Elevator of Awkward, Min Suk and Soo Young are talking and flirting when Jin Woo gets in. Min Suk immediately grabs Soo Young’s hand and holds it tight. But Jin Woo can’t accept defeat, and states his intentions to continue caring about Soo Young. It’s funny to see Min Suk admitting later that he was very petty.

They run into Gramps at the store and go back to their house to eat a little before putting Gramps to bed. Soo Young wanders into Min Suk’s room and he rushes ahead of her to hide his dirty underwear; except she incorrectly assumes that he was hiding porn, haha. She discovers that Min Suk had been keeping the weird moss thing for her and it’s been growing. As they brush the plant, their fingers touch and the mood instantly changes. Min Suk stutters out that she should take the plant with her when she goes and then leaves to make some drinks for them.

Soo Young starts flipping through a photo album and sees a nude picture of Min Suk when he was a baby. She insists on having it to keep and he tries pulling it away from her; they go back and forth and then, through the kdrama cliché gods, Soo Young ends up on top of Min Suk. They’re both flustered, and after Soo Young moves, Min Suk criticizes her for being a “lustful grandma.” This show. Soo Young persuades Min Suk to help her exercise, too.

It was heartbreaking to watch Min Suk take down all of his hockey pictures and trophies. He even tried to throw them away, before ultimately deciding to keep them. Soo Young looks up the stretches needed for the rehabilitation of Min Suk’s injury and sneaks them into their workout session the next morning. When her short clothes show her stomach as she’s exercising, Min Suk runs over and pulls her shirt down only to have her swat him away with a reminder of no physical contact. Irritated, Min Suk fake punches her when she looks the other way. Poor Min Suk and his sexual frustrations.

In another attempt to atone for whatever sins he’s committed, the President sends a gift basket and money to Papa Choi. He stalks into the President’s office and rips up the check in front of him, warning him not to butt into their lives. He leaves just as Jin Woo and the lackey are approaching. The lackey informs Jin Woo that he used to be Lee Jung Soo’s chauffeur, and that Lee Jung Soo himself used to be partners with the President. He says that Lee Jung Soo had troubles in business because of the President and ended up killing himself. Then, shortly after, his wife died. Jin Woo does some research and receives a text from Yoo Ah telling him to meet with her. 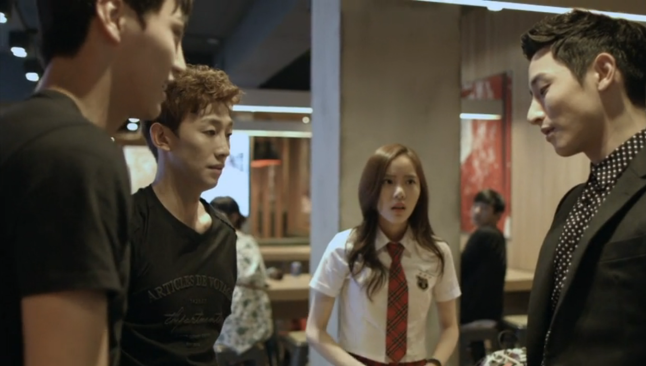 Soo Young makes Min Suk meet her again to work out. By this point, Min Suk can see what she’s doing; he eventually snaps and yells at her for not being able to face reality and see that it’s impossible for him to play hockey again. He further explains that even when his Mom and Dad died, and his brother left him, that he didn’t hope for impossible things.

Yoo Ah meets with Jin Woo to repay the money he lent her earlier. Unfortunatley, Tae Suk and Duk Hwan happen to be walking by and see the exchange. Tae Suk storms in and grabs Jin Woo, but Yoo Ah hurriedly tells them Jin Woo works with her sister and they apologize. As Jin Woo leaves, he sees Papa Lee with Min Suk and you can almost see the wheels turning inside his head. It looks like he believes “Hyung Suk” is there to get revenge on the President for his father’s suicide.

The next day, Soo Young is a bit hesitant around Min Suk. Meanwhile, Jin Woo finds out and then tells his father that Lee Hyung Suk is the son of Lee Jung Soo. The President says he’ll take care of it and later invites Min Suk to lunch. He inquires about Min Suk’s parents and how they died. Min Suk easily divulges everything he knows, which is not much.

Soo Young asks Min Suk to meet her at the park. Though she had told him earlier of her deep fear of flipping over the bars at the park, she does it in front him, showing him that things that you think are impossible can happen. Min Suk is so touched that he reaches out and kisses her. Hopeful, he puts all of his hockey pictures back up in his room and goes to the coach and asks to play one more time.

Jin Woo welcomes a distant friend back to Korea; one who had previously worked with Hyung Suk on a project in Germany. When they run into Min Suk in the hall, though, he obviously doesn’t recognize the man. Min Suk is later taking the elevator in his building while dressed in his school uniform and when the doors open, Jin Woo is standing there, smirking. He has finally figured out that Hyung Suk is, in fact, high school student Min Suk.

Oooo, Jin Woo knows everything know, I wonder how he’s going to use that information. Just when Soo Young became comfortable with the fact, someone else finds out. I’m glad that Jin Woo has discovered the secret, since it should accelerate the action and, particularly, the Hyung Suk and Lee Jung Soo backstories. It’s not that I don’t like the love stories, but it’s been awfully heavy in that department for the last batch of episodes. I want to see more of the overarching mysteries being solved now that we’re getting to the end of the show.

I’m getting especially annoyed at Jin Woo’s pointless persistence in terms of Soo Young. It’s obvious he’s fighting a losing battle. Now that he’s uncovered Min Suk’s big secret, maybe he’ll lay off trying to beat him in the love area. In contrast to Jin Woo, it’s nice to see Yoo Ah giving up gracefully and I hope to see her and Tae Suk getting together by the end.

This episode was as solid as the others, though I miss the funny spark and workplace shenanigans of the earlier episodes. I’m not sure what to expect now that the big secret has been revealed, but I can’t wait to find out!

One thought on “High School King of Savvy: Episode 13 Review”